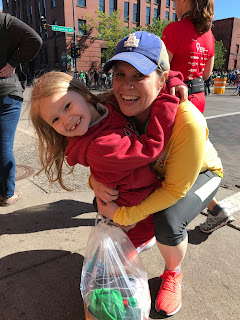 By now, eight half marathons into my life, I know a few things about This One in particular: You can’t stream Spotify for about the first 3-5 gorgeous, albeit Ingalls-Wilder-ian, North Shore miles, so download a playlist if you’re going to need jams; Sit on the right side of the shuttle bus for front row seats to sunrise sky art -- this year in hyper-color pink and seemingly edible; There is a difference between running pants and yoga pants, the latter offers more ways to bring your own unique voice to your race -- and later, the chafe is a humbling reminder to check your vanity.

I stood in the pack on Saturday morning trying to decide if I had to pee. If so, was it the kind of pee that I could hold for 13.1 bladder-quaking miles? My pee-trigger has a light touch. Alternately, I firmly believe that if you work hard enough you can sweat the pee out of your forehead, though I've never checked the science on this.
“I have to go to the bathroom,” I said to a friend who had landed nearby in the crush of bodies.
“Which one?” she asked.
“Um. The easy one,” I told her.
“I did the hard one this morning like six times,” she said, then turned to the man between us. “Is this OK?”
“Yep,” he said.
“You don’t have to go,” she said, trying to head-game me out of it.
I weighed my bladder. No exactly sloshing. She might be right.
“Maybe my urethra is just nervous,” I suggested.

CHIP TIME AMBASSADORS, A STUDY
When the starting horn didn’t quite blast, we looked at each other. Was that it? The weak sound of a lazy trombone. BRRumpit-pfff. The pack started to shift forward. It was now or never. I'm way too competitive to tack a mid-race bathroom break to my race time. I did it once. It's a blight on my record. I nodded to the side of the road.
“I’m gonna go,” I said, and lost her forever.
I’d never done this before. Even though the race is chip-timed, I’ve always tried to blast out of the gate. This has proven to be an annoyance. I always end up behind running friends in a row like extras from "A Chorus Line," all sharing fire-up jams from one person's tinny iPhone speakers. One must almost hurdle the weakest link to get around them.
The stragglers, I found, were cool and casual. A woman stretched her quad while leaning against a man. They were engrossed, happy. Maybe a road-side book club or chatter about how bad news had befallen a mutual enemy. They were in no hurry. Me neither.
The line for the john was shorter, less fevered. These people, the Chip Time Ambassadors, would pass you toilet paper. Tell you if your mole looked weird. Wipe an eyelash from your cheek and ask you to make a wish.

ON PHONES AND SUCH
I got a new phone the night before the race. I needed a battery that would last at least 2 hours, if not 2 hours, 10 minutes. I devoted myself to a playlist in a way that I haven't devoted myself since wooing Barrett. I wanted something that started whoosh-y. Music for open roads, wind in your brows. Music for long, easy strides and never-ending white lines on a Scenic Highway. Chastity Brown. Frankie Lee. Japanese Breakfast. By Lakeside I'd want a slight boost: Mitski. David Bowie. Phoebe Bridgers. I dug into some classics from my inline period for a victorious home-stretch: Phoenix, MGMT, The Killers. And finally, Coldplay. "Viva la Vida." Translation: Congratulations, you have a pizza-sized ring of stomach sweat soiling your running shirt, you winner, you.
I also like to know my splits, as provided by Nike Run Club.
Anyway, this phone upgrade has been the difference between sliding a sleek little baby iPhone 6 into my breast pocket and lugging around the iPhone XR, a primitive version of microwave. I tried to stuff the brick into my running belt and, in turn, it started ringing.
For the second time in less than 10 hours, I’d accidentally called 911.
It’s pretty easy, actually, just press two of the three buttons at the same time. First there is a warning horn, slightly more aggressive than the one that started the race, then the sound of dialing.
“Sorry,” I said when the dispatcher answered. “New phone.”
“Are you sure you’re safe?” he asked.
“Yes,” I said.
“Would you tell me if something was wrong?” he asked, or something similar
“I’m fine. I’m running the half-marathon,” I told him.
“Good luck,” he said.
I decided to carry my microwave.
In the second mile, a deer appeared on the side of the road, running in the opposite direction. It happened so fast that no one had time to yell “YOU’RE GOING THE WRONG WAY.” But, gah. What if they did. Maybe, I thought, something is going to happen every mile. First 911, then the deer. What a year this will be! What a BLOG POST this will be.
Then nothing of note happened again.

FAST/SLOW
I was fast at first, then I was slow. About the time I started math-ing, and realized that I could potentially PR, I defied myself by slowing down, grabbing water at every station, stuffing a strawberry in my face. Then a woman, at least 7 months pregnant, passed me at quite a clip.
Get it, girl.
Whenever I see an athletic preggo, I congratulate her in my head.
“That baby is gonna come out real easy, you glorious athlete,” I think to myself, remembering the Hulk-tastic power required to push human head, not to mention shoulders, into the doctor's mitts.
Flashback: It never occurred to me to be healthy and pregnant. For me, it was a chance to test my skin seams. I remember trying to go for a walk at 8 months and tipping over in a neighbor’s front yard. I sat with my legs bent in front of me and wondered how I’d walk the half-a-block home. I like to describe that time as the “Let No Taco Go Uneaten” era. That was liberating, too.
Anyway, by the time I hit downtown I was really into The Meaning of It All. Sometimes when I am in a place with a collection of other humans, I imagine what it looks like from the sky. All these specks coming together to dance for each other, play a ukulele, toss a ripe strawberry into a gaping maw. Nothing matters; Everything matters. Discuss.
I finished in 2:06:something, both my third-best time and my sixth-worst time -- depending on how you look at things.

THE MIDDLE PLACE
I have not trained for half-marathons and crushed Camel Lites beneath barely worn Nike Pegasus before boarding a bus to the starting line; I’ve trained to the point of pre-gun nerves, an uncomfortable reminder of what it means to try hard and give a shit about something.
This year I was ambivalent. Didn’t give a lick.
“I wonder if my anti-anxiety meds are working too well,” I said more than once.
Barrett nodded, then ticked off times in the past month when I'd experience emotions.
"True, true," I said, a vision of my face cracking in half during Season 1, Episode 1 of "Broadchurch."
Physically, I’m in a middle place: cardio five days a week, yoga three days a week, whack weights-style classes twice a week. I am a few pounds heavier than I was last year at this time, but don’t weigh as much as I did six months ago. I’m on a break from drinking, but most nights I split half a pint of cashew ice cream with The Mister.
At breakfast every morning, we study our sleep Fitbit sleep stats, comparing deep sleep dips and the curve that indicates REM.
And as long as we're talking about bodies, my period made an encore appearance in the porta-potty before the race.

FLASHBACK TO TRAINING DAYS
My longest run was a 9 miler on the day of Bent Paddle’s Festiversary. I ran from our house, past the party set-up where I waved to my friend wearing a wide-brimmed hat, through Canal Park across the Aerial Lift Bridge and to the end of Park Point where my family was waiting. It was a great pleasure, an advertisement for running, really. Big sun, good tunes, the gushes of all that good runner junk. Afterward, my forehead was rough with dried sweat and I enjoyed that satisfying moment of peeling sweaty clothes and thunking them into the basket of dirty clothes.
It was an anomaly.
Now that I love trail running, I only have room to love trail running. It’s more interesting; It smells better. This has, accidentally, sucked all the love out of road running. The Willard Munger State Trail, a favorite out-and-back for a decade and a half, now makes me cranky with its familiarity.
That gorgeous spot with the walls of stone on both sides of the path? Bite me.
After my 9 miler, I quit. I decided not to do anything longer than that. One Saturday, I opted to off-road: from Spirit Mountain, through the woods, to our front door. Seven miles of dopey grins. I wrote a press release in my head, announcing my retirement from road running immediately following the Garry Bjorklund Half Marathon. “Regret to inform you …”

I’ve since signed up for a 5K that I do every year. I plan to loathe it, but I also plan to set a personal world record.